With Valentine’s Day upon us, sentimental folks might recall their own romantic moments. My special memory begins in the early 1990s, when I was the owner of a shabby chic store. Back then, as a thirty-something single mom, it wasn’t easy to make ends meet selling the discarded treasures of others. Auctions, flea markets, and garage sales were the way I stocked my vintage shop.

One summer day, I stopped at an estate sale. The attached garage of the stately brick home was filled with the earthly goods of an elderly widow. As she walked towards me, the old woman’s fragile condition caused her to lean heavily on a three-pronged cane. She was liquidating over a weekend, what had taken a lifetime to collect. Her gray hair was disheveled, and her eyes reflected the resignation that must have cost her a great deal. The widow needed to sell everything, and move to a place where she wouldn’t be alone. The newspaper’s classified ad didn’t say all that, but it didn’t take much to figure it out. I decided to buy a few things to help her in her season of transition.

“To everything there is a season, and a time for every purpose under heaven…a time to keep and a time to cast away.” I had always liked this insightful wisdom from the Book of Ecclesiastes, but the verses weren’t very comforting in light of this woman’s heartbreaking circumstances. After all, it was my “time to keep,” and her “time to cast away.” That’s why I let her do all the talking. I never even asked the stranger her name, since she didn’t volunteer it.

There was a vintage blouse among the possessions I selected to purchase. When the 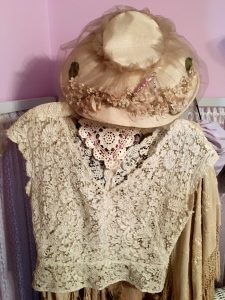 widow saw it her eyes seemed to look far away. It was as if she was transported to another time. A time when she was young and in love, and her future lay before her. Decades earlier, I think she said it was the 1940s, the lace top had been part of her wedding attire. Fifty years later, her husband was gone, and she could no longer care for herself. Reluctantly, she gently handed the blouse to me. My original intention was to resell it, but learning the garment’s history, instantly my plan changed. Before I realized what I was doing, I blurted out, “I promise you that I will keep it always.”

I’m not sure, whether the aged woman gave me a look of disbelief, relief or resignation. Her reaction didn’t matter. I made a promise, and I intended to keep it. For years, I hung the bodice on a satin hanger displayed with some antique hats on an oak coat rack in the apartment where my young son and I lived. I never planned on wearing it, because being divorced for over a decade, I assumed my days of being a bride were over. Then I met Larry Claypool. Larry was a forty-something school administrator who had never married. Almost right away, we both felt that divine providence had brought us together.

On February 9, 2002, I sensed that Larry was going to propose. That morning as I dressed for our date, I instinctively reached for the ivory top, which represented decades of a marriage that had lasted. I had never worn the blouse before, so I carefully removed it from its satin hanger and put it on over an off-white camisole. Larry surprised me by taking me to the Swan House Tea Room in Findlay, Ohio, where he knelt down on one knee, and asked me to be his wife. The busy teahouse filled with women fell strangely silent. When I said, “Yes,” the hushed patrons erupted in congratulatory applause and joyful laughter. 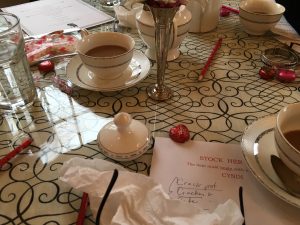 Recently, an older never-married-friend whom I hadn’t seen in over 15 years invited me to her bridal shower the first week of February 2017 at the Swan House. Exactly fifteen years to the week of my romantic proposal there. It was only right to wear the antique top to the tea room again, because this June Larry and I will celebrate our fifteenth wedding anniversary. The vintage blouse remains a cherished memory of my own proposal coupled with another bride’s long ago wedding day. Unfortunately, I will never know her name. Still, I intend to keep my promise to her to care for it – for as long as time allows.

Christina Ryan Claypool is a freelance journalist and inspirational speaker. Contact her through her website at www.christinaryanclaypool.com.