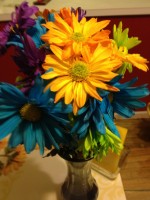 As we observe Thanksgiving week, everyone seems to be talking turkey, family gatherings, and all about giving thanks. Yet, maybe you haven’t been at the top of your game lately, which can make it difficult to have an attitude of gratitude. Whether it’s losing a loved one, unemployment, a chronic health crisis, or a financial dilemma, life’s circumstances can really get you down.

Down is where Los Angeles judge, John Kralik was when he began to write his 2010 memoir, “365 Thank Yous,” later known as, “A Simple Act of Gratitude.” The book’s back cover says that this inspiring story is about how, “… writing thank you notes – led a hopeless, angry, middle-aged man out of despair and into a wonderful life.” Kralik’s book is not really as much about writing thank you notes, as it is about becoming aware of the many blessings one is granted daily.

For example, Ed Ball is grateful for, “…family and friends.” Ball is the executive director of Ohio’s Shelby County Veterans Service Commission. Ball graduated from Sidney High School in 1976 and two days later was in basic training. After a 20 year career in the Navy, he returned to his hometown, and today assists those who have served our country.

Although for many military families, Ball admits that it is, “A tough time of year…We have a lot of veterans not only here in Shelby County, but across Ohio [and all across our country] that are deployed to Afghanistan,” he said. There is an upside though, because “We had 2,000 personnel [from the Ohio National Guard] return…this year. They will be spending the [holidays with their families]…for that we are grateful,” said 55-year-old Ball.

Still for many there is an empty place at the holiday table. I know my Mom and Stepdad’s absence is something that I’m still getting used to after two years. Like me, many of you might have a loved one overseas, recently deceased, or just absent due to a broken relationship. Or you might spend your holiday dinner alone, since many families feel the fracture of divorce or even simply geographical distance.

Still there are things to be grateful for, no matter our circumstances. Because in another book about gratitude titled, One Thousand Gifts: A Dare to Live Fully Right Where You Are, author, Ann Voskamp displays how it is the little blessings that folks often overlook.  Voskamp’s memoir is all about answering some difficult spiritual questions like, “How does one slow down enough for the soul and God to live in synch?”

After all, to experience gratitude one must reduce life’s pace, and become aware of the significance in the seemingly insignificant. Thankfulness not only at Thanksgiving, but all year long can be a powerful tool indeed. “To fully live – to live full of grace and joy and all that is beauty eternal. It is possible, wildly,” writes Voskamp in her poetic style.

Truthfully, I haven’t always known a lot about gratitude. Rather, I lived much of my life with the cup half-empty mentality, like many Americans concentrating on what I didn’t have. Not so much desiring material things, rather missing the little blessings that are easy to take for granted. Now I strive diligently to appreciate what each day brings. And sometimes on holidays when your family is broken, or you are grieving for someone who has passed away, I know this isn’t easy.

Still regardless of what is going on in our lives, if we look closely, we will usually find that there is much to be grateful for. After all, there is a God who loves us unconditionally, who will never leave us alone, and who can do anything but fail.  For now, from the Road Less Traveled, a Happy Thanksgiving holiday to you all, and remember to give thanks!

This column is dedicated to Kimberly Winegardner, my precious friend who won her final battle over cancer on Oct. 1, 2012, by going to be home with her Lord.

June might be the traditional month for weddings, but all year long beautiful brides in flowing white gowns and handsome grooms in black tuxedos promise to be together, “Until death do us part.”  Sadly, if we look at the grim statistics, many of these marriages are destined for divorce courts.

Defying the odds, are Dave and Arlene Gates who celebrated their 46th wedding anniversary on July 2, 2012.  Arlene encourages others to begin their marriage with the conviction, “that this is a lifetime commitment.” The retired teacher has heard people say they never have arguments, but she believes that, “In most relationships there are disagreements…. When we disagree…we normally keep the issue on the disagreement and don’t dredge up accusations and hurtful things just for the sake of retaliating.”

Dave who is in his late sixties, was also a teacher, assistant principal, and head football coach both at Graham and Sidney High Schools. As for disagreeing, he remembers the uncertainty that a difference of opinion can create early in a marriage. “When you’ve been married awhile you have the benefit of looking back and saying, ‘We’ve been there before.’”

Dave stresses that marital battles are not about winning or losing. “There’s no score board in a marriage,” he said. His advice to couples starting out is to take accountability for their actions by recognizing, “What part of this disagreement am I responsible for, and what can I do to see it doesn’t happen again?”

“Sometimes, we agree to disagree,” Arlene admitted. But don’t let a disagreement cause you to imagine that, “We are not suited for each other, [or that] we can’t make this work,” she said. Rather know, “This too will pass.” They attend the First Baptist Church. “…The same faith is a real grounding in sharing what’s important…you are accountable to God even if nobody else knows what’s going on,” said Mrs. Gates.

In a long-term marriage, Arlene mentioned the importance of keeping the “romance and love” alive.” The Gates are also concerned about the lack of positive role models for young people faulting today’s media and celebrities for portraying a skewed picture of reality.

Mary Kathryn Mescher of Fort Loramie would say her role models were her own family. She and 74-year-old husband, James who is retired from Midmark Corporation, celebrated their 50th wedding anniversary this past June.

Although the 71-year-old wife never received any specific advice from her parents, their example of a fifty-plus-year marriage was a living testimony. “We were just brought up when you got married you were married. You sort of follow in their footsteps…how they lived. My husband’s father and mother were married 65 years, and I guess that’s what we are shooting for,” she said.

“There’s a lot of difference now days between the kids and us. They have jobs and can make it on their own,” explained Mrs. Mescher. “We were home with our children. We quit working. We relied [on our spouses] to bring the money in….It was a kind of partnership,” she explained of the cultural shift with women working outside the home.

Her advice to couples just beginning their journey is, “It’s a lot of give and take.” For folks experiencing difficult times, “Hang in there, tomorrows going to be better,” encouraged the retired St. Michael’s church employee. As for motivation, “You live for your kids and grandkids.”

Sharing happenings about her children and grandchildren is one experience that Sue Britton misses greatly. “It’s lonely being alone… There isn’t a day that goes by that I don’t say, ‘Wait until Bill hears this,” said the 78-year-old widow. Sue and her late spouse, Bill Britton were both battling cancer at the same time three years ago. She survived her bout with ovarian cancer, but tragically Bill succumbed to lung cancer three years ago this past May.

Married in 1955, the couple shared almost 55 wonderful years together. “My father always told me to marry a man who is good to his mother…and Bill was.” Sue is grateful she followed her dad’s wise advice. The couple raised three children together with Sue spending “ninety percent of her married life as a housewife.” Her suggestion for a good marriage is to, “Just trust each other…in every way.” If there are, “any reservations, don’t marry them,” she warned.

Sue’s life seems full with family, friends, and restored health. Yet the outgoing widow said, “I would give anything for just five more minutes” with her husband. “Because I just had so much to tell him that I never told him. It’s…companionship you miss the most…”

In closing from the road less traveled, if you have some things to tell someone you love, why not do it today. After all, they might not be here tomorrow to listen.