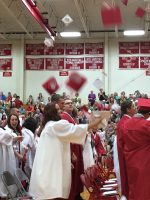 “Do one thing every day that scares you.” This quote is commonly attributed to Eleanor Roosevelt, but according to www.quoteinvestigator.com that might not be so. “An exact match for this quotation appeared within a June 1997 essay by Mary Schmich, a columnist for the Chicago Tribune. She began her article with the statement: ‘Inside every adult lurks a graduation speaker dying to get out,’ and she continued by presenting a staccato sequence of items of advice aimed at young students,” reports Quote Investigator. Among those items was the phrase, “Do one thing every day that scares you.”

If Roosevelt, a well-known social activist of her day, did coin this challenging saying, it was not based on a characteristically fearless nature. In her 1960 book, You Learn by Living, the late First Lady explained, “Fear has always seemed to me to be the worst stumbling block which anyone has to face. It is the great crippler. Looking back, it strikes me that my childhood and my early youth were one long battle against fear.”  Like Roosevelt, many of us have some kind of fear we must overcome to do anything worthwhile. Or else, we don’t overcome it and simply live within the confines it creates.

In a 2014 Washington Post article, “America’s top fears: public speaking, heights, and bugs,” the title includes the most obvious internal fears many of our country’s citizens possess. In a related 2016 USA Today newspaper column, “Survey reveals what Americans fear most,” more external fears were: 1) corruption of government officials, 2) terrorist attacks, 3) not having enough money for the future… [and even] 8) identity theft.

In his article, the “The Difference between Fear and Phobias,” Dr. Todd Farchione PhD writes, “The distress associated with the specific object or situation and the need to avoid it can become so intense that it interferes with a person’s life.” The Boston University researcher added, “It’s this interference with everyday life and ability to function normally that turns a fear into a phobia.”

What keeps you up nights worrying? For many people something like having to make a public presentation at work can be a real anxiety inducer. Personally, I have been a public speaker for 25 years this month. I’m sure I must have been beyond terrified that first time when I spoke at a storefront church. Still, due to professional training and decades of experience speaking at about any kind of venue imaginable, I rarely get excessively nervous before an upcoming event. But a very real fear that affects my everyday life is driving in heavy traffic. Being involved in a serious car accident a decade ago produced this particular anxiety.

I can’t rationalize this fear away, since distracted drivers are everywhere, texting, talking, and even overdosing on heroin on I-75. Many individuals I encounter also seem to have some sort of fear or even deep-rooted phobia they grapple with. Often, these issues cause daily anxiety and keep them from doing the very things they are called to do. For instance, I have a relative who has no problem driving in big city traffic, who would rather have a tooth drilled without Novocain than to fly on an airplane. After all, the fear of flying is another one of those activities that lots of folks dread.

Joyce Meyer knows firsthand about overcoming the fear created by a childhood filled with sexual abuse and dysfunction. Today, the national speaker who leads a worldwide ministry encourages others to “Do it afraid!” whenever she addresses the topic of fear. Whatever you want to do in your life, you might have to do “it” with your knees knocking together according to Meyer. There might be that sick anxious feeling in the pit of your stomach, too. However, when you make a decision to do whatever it is that you are afraid of doing, with some divine assistance, you can find the courage to succeed in accomplishing almost anything.

Maybe that is what this year’s graduates need to know. The world seems scary. The economy is volatile, and the job market is erratic. But follow your dreams no matter how frightening or impossible they seem. Follow them one baby step at a time, never allowing fear to stop you from achieving your goals. As Meyer says, just “Do It Afraid!” That’s what I do whenever I get behind the steering wheel of my SUV and head for the Interstate.

Christina Ryan Claypool is a freelance journalist and inspirational speaker. Contact her through her website at www.christinaryanclaypool.com.