END_OF_DOCUMENT_TOKEN_TO_BE_REPLACED

July is officially National Ice Cream Month. Until this week, I never knew such a month existed. But what could be more newsworthy? Most folks are familiar with the well-known phrase, “I scream, you scream, we all scream for ice cream.”  In reality, this isn’t a famous quotation, rather it’s a song title and lyrics written and first published in the late 1920’s by Billy Moll, Robert King and Howard Johnson. “It was recorded by Walter Williams and Waring’s Pennsylvanians,” states the Website www.culinarylore.com. “This song became a Dixieland Jazz standard, and was favored by such important outfits as the Preservation Hall Jazz Band of New Orleans.” Some sources erroneously credit Woody Allen with composing this tune. The reason is that he used it on the soundtrack of his 1973 movie Sleeper, but “…none of the actual songwriters are mentioned in the credits.”(www.culinarylore.com)

Why is ice cream so important? If you ask many individuals, especially those of the female gender, it’s way up on their list of most desirable comfort foods. In the article, “5 Reasons Why We Crave Comfort Foods,” from Psychology Today by Shahram Heshmat Ph.D., “Comfort foods are typically energy-dense, high fat and sweet, such as chocolate, ice cream, and French fries.” There’s a reason we crave these kinds of foods when we are feeling down, low-energy, or have been dumped by a significant other. “They give distinctive pleasure or make us temporarily feel better,” writes Dr. Heshmat. “Highly palatable foods activate the same brain regions of reward and pleasure that are active in drug addiction.”

This isn’t good news, because in our nation, obesity is at an all-time high. If occasional cravings turn into a routine, the scales can reflect this lifestyle. Something as seemingly harmless as a Turtle Sundae could cause gradual weight gain, if you indulge in one three times a week for years like a friend of mine did. Said friend has to remain anonymous for obvious reasons, but by cutting back her sundae habit she lost quite a few pounds almost effortlessly. Still, this should not negate the delight that can be derived from eating an occasional ice cream treat.

Apparently, ice cream became such a popular part of American culture that “President Ronald Reagan designated July as National Ice Cream Month with the third Sunday of the month being National Ice Cream Day” according to www.nationaldaycalendar.com.

People have been eating ice cream for centuries. “Nero of Rome was said to have enjoyed harvesting ice or snow, then flavoring it with honey or other flavorings,” also reports www.nationaldaycalendar.com. “In the summer of 1790, George Washington spent approximately $200 for ice cream…Thomas Jefferson actually made his own recipe of ice cream, too.” As for ice cream’s origin, “The Chinese are generally credited for creating the first ice creams, possibly as early as 3000 B.C.,” proposes www.foodtimeline.org. Another BBC news Website states that, “An ice-cream-like food was first eaten in China in 618-97AD.”

Honestly, who cares who first invented the incredibly tasty stuff? Most Americans are just grateful it’s been a part of our history for as long as we can remember. Personally, as a little girl it was thrilling to go for ice cream and select a chocolate cone from the countless choices. I could never understand why people ordered Butter Pecan, Black Cherry, Orange Sherbet, and on and on, when they could have chocolate. Today, I’m a much more sophisticated connoisseur with my favorite flavors expanding to include: Sea Salt Caramel, Rocky Road, Cookies and Cream, Turtle, Moose Tracks, etc. 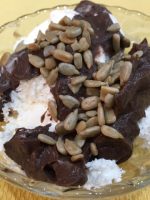 When we were first married over fifteen years ago, my sweet husband would bring home a half gallon of one of my favorites. He thought I would be pleased, and was surprised when I told him that it was too tempting to keep ice cream in the freezer. I am not proud of the amount of ice cream that I can consume when craving comfort food. This confused him, because the poor man mentioned how he had come home on more than one occasion and found me eating ice cream, while watching a movie. Guilty as charged, but it was a chick flick, I’m sure. A girl can’t possibly watch a sappy romantic movie without a Hot Fudge sundae. As the famous song’s lyrics also say, “…Tuesdays, Mondays, we all scream for sundaes, Sis-boom-bah!”

There’s more, but I think I hear the sound of an Ice Cream truck in the distance.

Christina Ryan Claypool is a freelance journalist and inspirational speaker. Contact her through her Website at www.christinaryanclaypool.com. Her first novel, Secrets of the Pastor’s Wife will be released this fall.