If you are young person today, there are probably a lot of things that annoy you. If you are not young, then you have to understand that over the last decade the word, “annoy” has taken on a whole new meaning. At first, I was intrigued by the way a teenager angry at their parents, teacher, or a peer could say, “They are so annoying,” and make it sound like a degrading profanity. If you listen closely, you will find that some teens find most of life’s frustrating circumstances “annoying” like having to do homework, clean their room, or even a bad hair day.

That’s why I thought the word, “annoy” so aptly describes how I felt some years ago when attending a meeting with hundreds of college students, and one very renowned speaker. This man had traveled countless miles to address the group hoping to impart some of the wisdom that he had learned on his life’s journey. Unfortunately, many undergraduates in attendance that day probably didn’t hear a word he said. After all, they were really busy. Earbuds were everywhere, with most students either engaged with an electronic device, or else frantically texting on their cell phones.

It was like a technology zoo in the auditorium that morning and all the battery powered caged animals were running amuck. The seventy-something speaker initially looked confused as he tried without success to gain the attention of his audience. Then I sensed his frustration and irritation realizing that he was being, “dissed.”

“Dissed,” might have just caused your internal spell check to turn code red, but it’s now accepted in mainstream usage. According to the Urban Dictionary “being dissed is the act of being disconnected, by voice or by modem from another party.” Another definition from the same source, says that “dissing someone is showing disrespect to them.”

Bottom-line, an alarming percentage of the learners gathered had opted to listen to another source of technological input, cutting off the speaker’s ability to be heard. The presenter finally seemed “annoyed” himself, and finished his talk rather abruptly and somewhat disheartened. I wondered what happened to the age-old principle to “listen when someone is speaking.” Or what about the etiquette rule of turning off technology when a meeting begins? 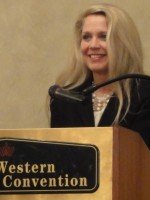 I was more than annoyed; I was truly heartbroken, concerned that these bright students were a precursor of the future. This topic is personal for me, because I’ve had to battle ongoing distractions as a public speaker for the past two decades. I’ve talked through screaming babies, women filing their nails, teenagers looking bored to death, and ringing cell phones. It’s difficult to explain away distracting phones, yet I have always comforted myself with the knowledge that the mom of the screaming baby or the woman manicuring her nails might need to hear what I’m saying. Same way, with a seemingly uninterested teen, since many times, hurting adolescents are listening intently but have to act bored for fear of being labeled uncool.

My school administrator husband whom I affectionately refer to as “Mr. Rules,” was visibly disappointed when I reported the technology frenzy of that morning’s event. He mumbled the word, “confiscate,” which I have since learned is what most K-12 public school policy dictates when students are using cell phones or technology inappropriately. Sadly, this policy was obviously not in place in the post-secondary gathering which I attended. Since the most distressing part is that the elderly speaker was African American, and his audience was comprised of about 95 percent Caucasian college kids. This eloquent orator had a culturally diverse message that those young people needed to hear. He might think he was disrespected due to his age or race.

But the truth is that many students were just too obsessed with their electronic devices to pay much attention.

Famous civil rights leader Martin Luther King Jr. once said, “All progress is precarious, and the solution of one problem brings us face to face with another problem.”

The problem is that the development of technological devices has rapidly exceeded the rules for their use. Maybe universities could create a course entitled, “The Etiquette of Personal Technology 101,” which we all could benefit from.

Christina Ryan Claypool is an award-winning freelance journalist and inspirational speaker. Contact her through her Website at www.christinaaryanclaypool.com